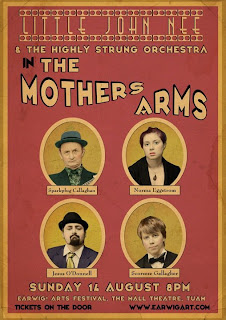 Tuam: a small town in North Galway - not the kind of place that always brings magic to mind yet, at a certain time every August, there seems to be a glut of it. This year's Earwig Arts Festival (12th to 21st) began with a cracking street show, followed the next day by a visual arts trail around the town.  There are also performances by local actors, musicians and writers.
Last Sunday in The Mall theatre, Little John Nee aired his latest piece The Mother's Arms. The show began with John and The Highly Strung Orchestra entering at the back of the room and walking to the stage. They were making a shuffling din that sounded like the start of a Tom Waits song - but the comparisons end there.
Welcome to Planet Nee.
Our host pointed to two miniature chairs at the front of the stage, and lamented the tension created by waiting for these two punters. The audience were invited to shake their limbs and relax, and soon found themselves in in The Mother's Arms, a pub in a forlorn, rainy corner of Donegal.
A bluebell, bereaving the loss of his beloved, perishes in a pool of beer slops. A hippy with a history extols the virtues of love and organic vegetables. Taxi Mc Dermott, behind the wheel of a '59 Ford Zodiac that also carries the members of his band, parks outside the pub. He wants a gig, bed, board - and perhaps more.
The Mother's Arms is a show littered with wonderful moments. There's a 70 year old woman who describes the details of her recently acquired tatoos. Then there's Rose, the pub's landlady who managed to escape a Deliverance like fate in Florida. At one stage, two headlights were raised over our host's head as he took on the persona of a boy racer. Little John, a man that can sing, write, act - and rap. Like a demon!
Praise has to be given to Nee's collaborators on this show. Jeremy Howard, Andrew Galvin and Orlaith Gilcreest form the Highly Strung Orchestra and are given typically colourful new names - somewhere in the world, I really hope there's a man called Hayzeus O'Donnell. The trio play piano, sax, clarinet, guitar, bazoukis, petrol cans and more throughout the performance. And cluck like chickens. It would be great to hear this music on an album - there are some serious hooks in here. Also, 'do the Mahatma Gandhi / and let in the light' is a contender for lyric of the year.
But The Mother's Arms has to be seen in the flesh. When Taxi McDermott and his band come around again, don't miss them. I could yammer away quite happily about this show - but sometimes you just run out of adjectives. So, indulge me dear reader as I paraphrase a little known American artist.
'You could've seen Tom Waits for €120 in The Phoenix Park
You could've seen Little John in The Mall for a tenner

And though it's my opinion
I may be right or wrong
You'll find them both
In the Grand Canyon
At sundown.'